Top-rated patient medical recording app
In 2019 I joined Medcorder as the founding designer to help patients better understand their doctor and share it with family during critical care scenarios such as cancer. As the founding designer, I was responsible for the iOS and Android app, website and kiosk recording device, as well as marketing. 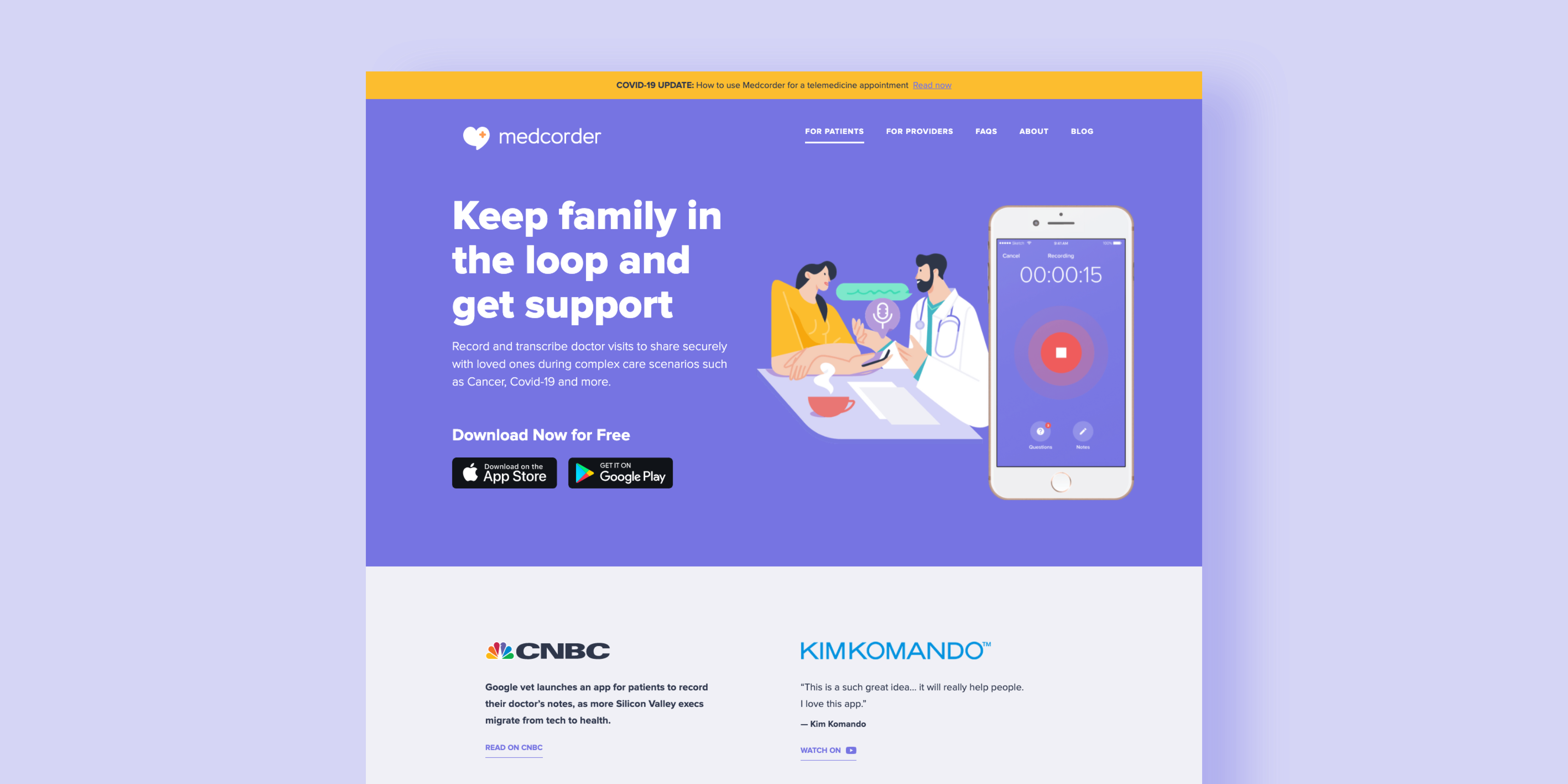 Medcorder was founded by David Weekly after experiencing the loss of his father to cancer. Through that journey he saw a need for better tooling to support patients and their family throughout difficult medical situations so family could hear exactly what the doctor said and be more involved in research and care decisions.

When David reached out to me about Medcorder, I was excited to work with him again having enjoyed the time we worked together on the Collaboration Tools team at Meta. I'd also had my own bout with cancer in my family and I could relate to and support the mission. 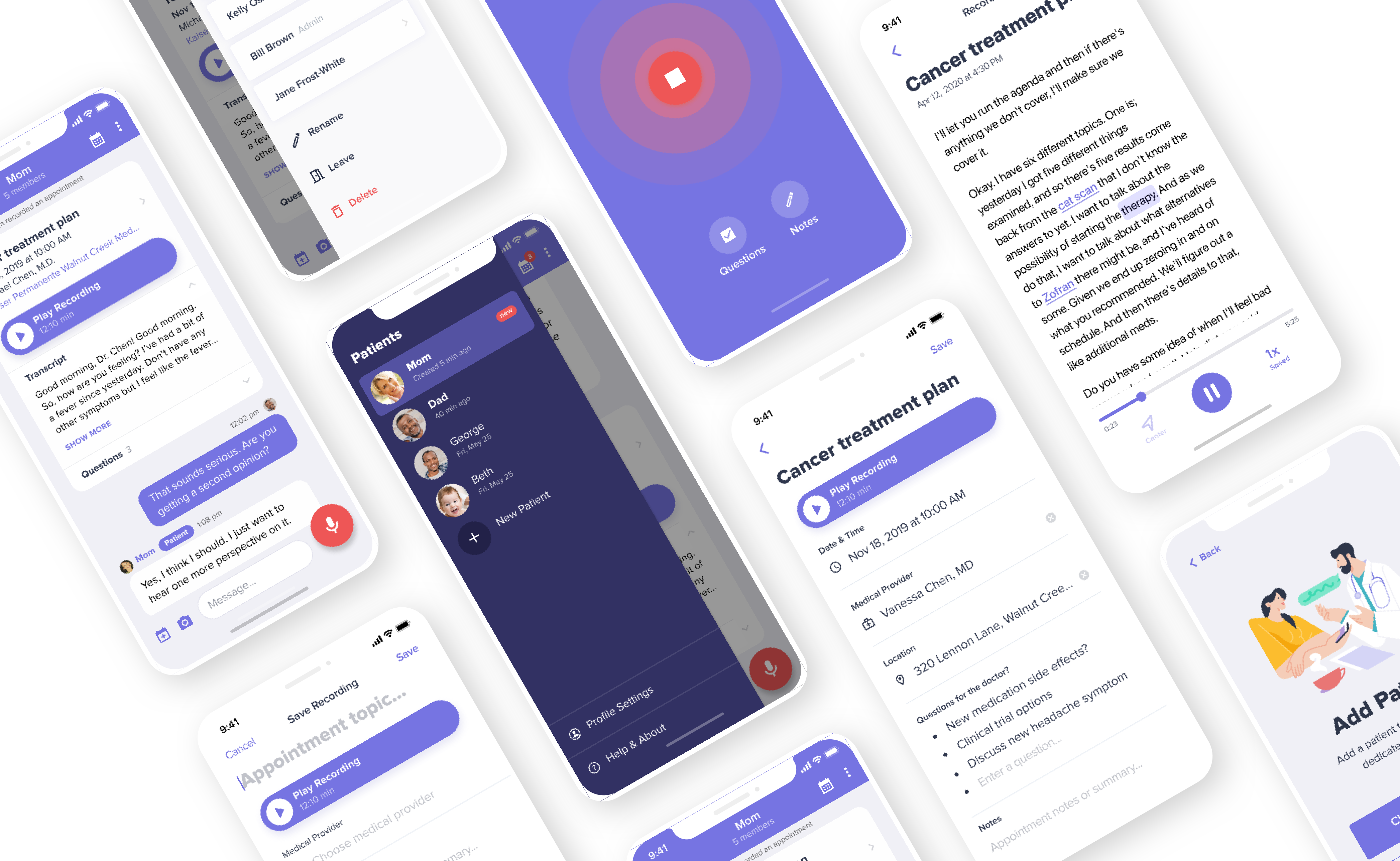 Medcorder was a small team when I joined consisting of David as the product manager and two engineers. I was the first product designer to join the team and was responsible for continuing to iterate on the MVP of the app, helping to improve the core functionality and grow the user base.

Based on initial user feedback collected by David, It was clear the core feature of the app, reviewing the transcript and audio, was providing a lot of friction. Users wanted the ability to scrub through the audio and skip to the most important parts of a conversation to access the key most important moments. The first version of the app made it hard to navigate the long transcript and had no search function. Also when you scrolled through the transcript, the play/pause button would scroll out of view requiring users to scroll back to stop the audio. 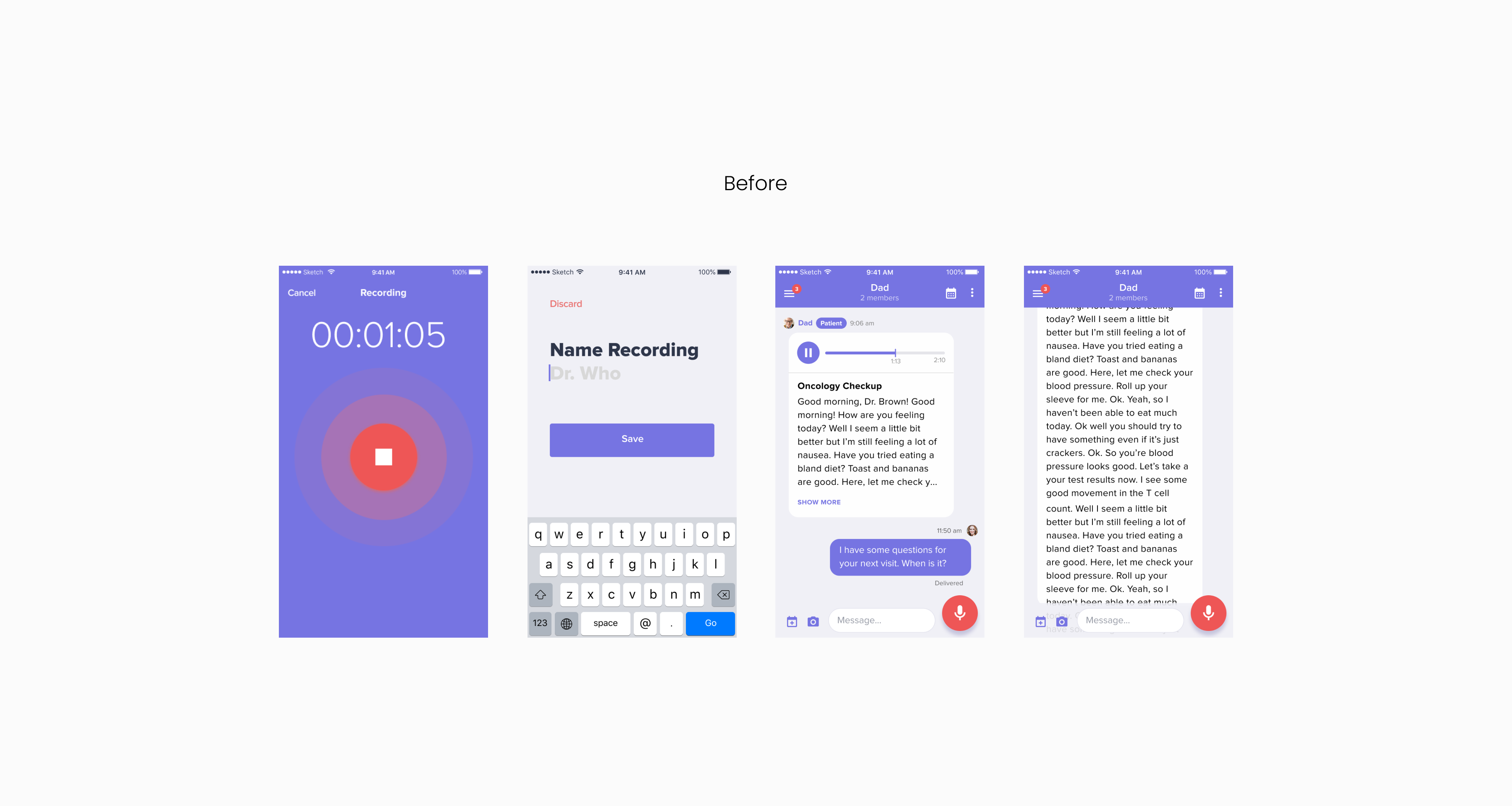 I began the design process by reviewing the app thoroughly, doing an audit of apps with similar features and brainstorming with the team.

Together we determined that the app should have a dedicated transcript and audio view with search and a medical term highlight feature to make it easier to identify key words and easily look them up. After defining the core features and design requirements, I created multiple design concepts in Figma. 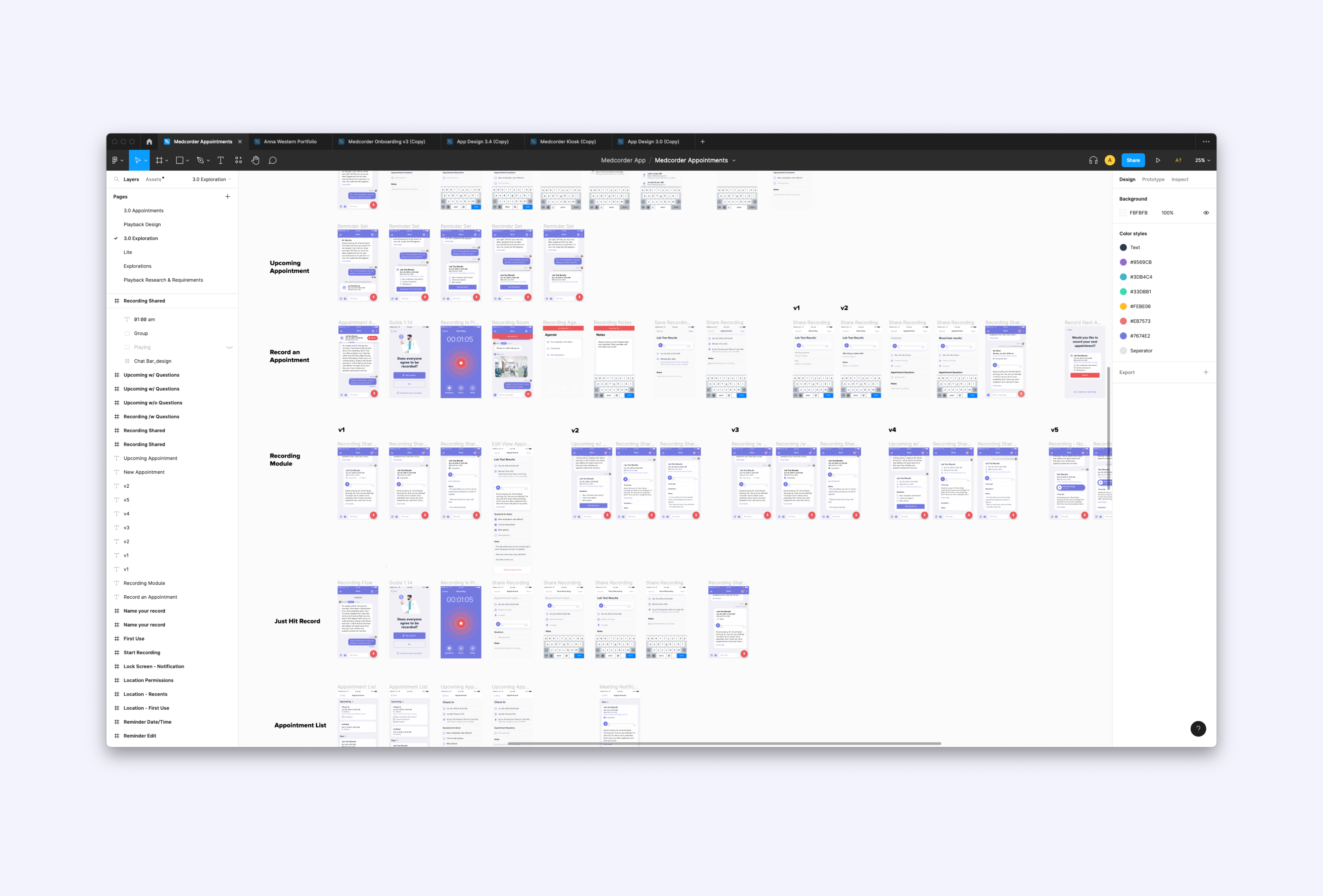 I ultimately landed on a solution that created a dedicated transcript review page with audio controls at the bottom. The appointment module in the chat room would show a truncated version of the transcript as well as accordian style sections to view notes and questions for the doctor. This way the appointment module would never be too tall to make it difficult to navigate the chat view. And patients could add important information about the appointment such as the doctor and location. 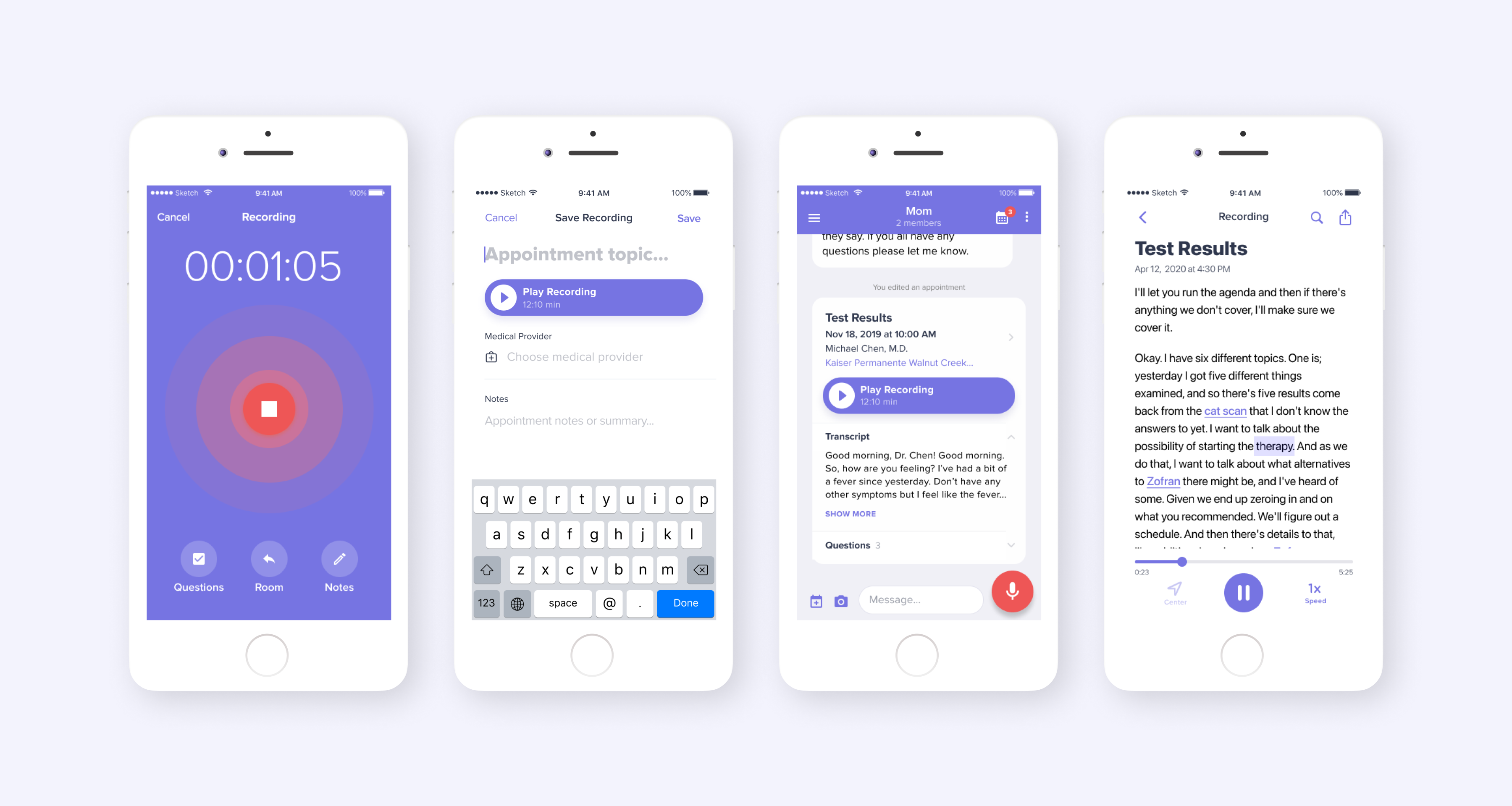 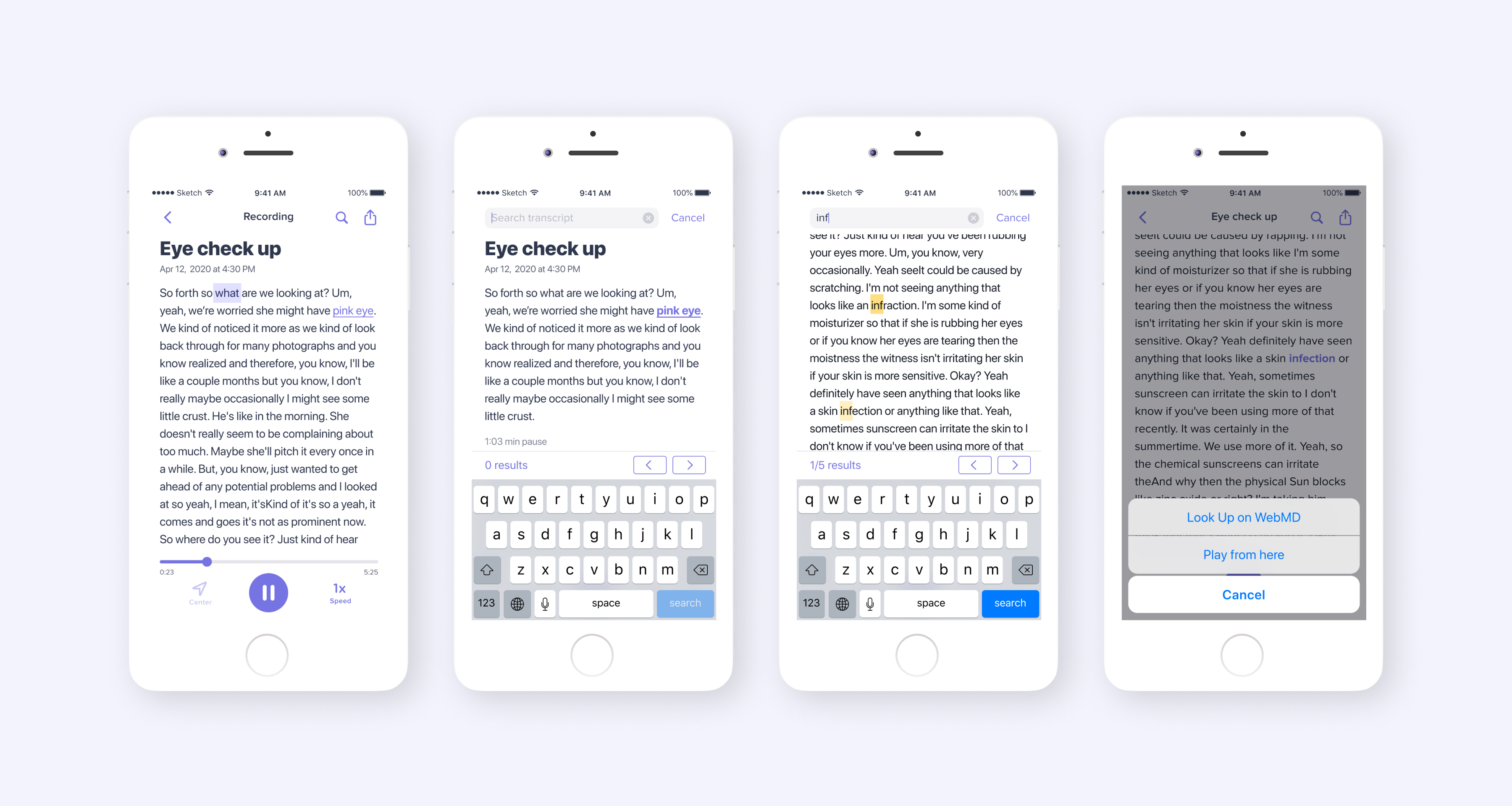 In addition to appointment recordings, I worked on various concepts for onboarding, patient profiles, recording telemedicine appointments (which became crucial during the pandemic) and an exam-room recording kiosk. For each of these features and products I used the same design process, working closely with David and the engineering team to evaluate user behavior based on metrics and conduct qualitative user interviews, brainstorm and define features and build and test. Design was used to quickly try out new product concepts and help the team envision the future. 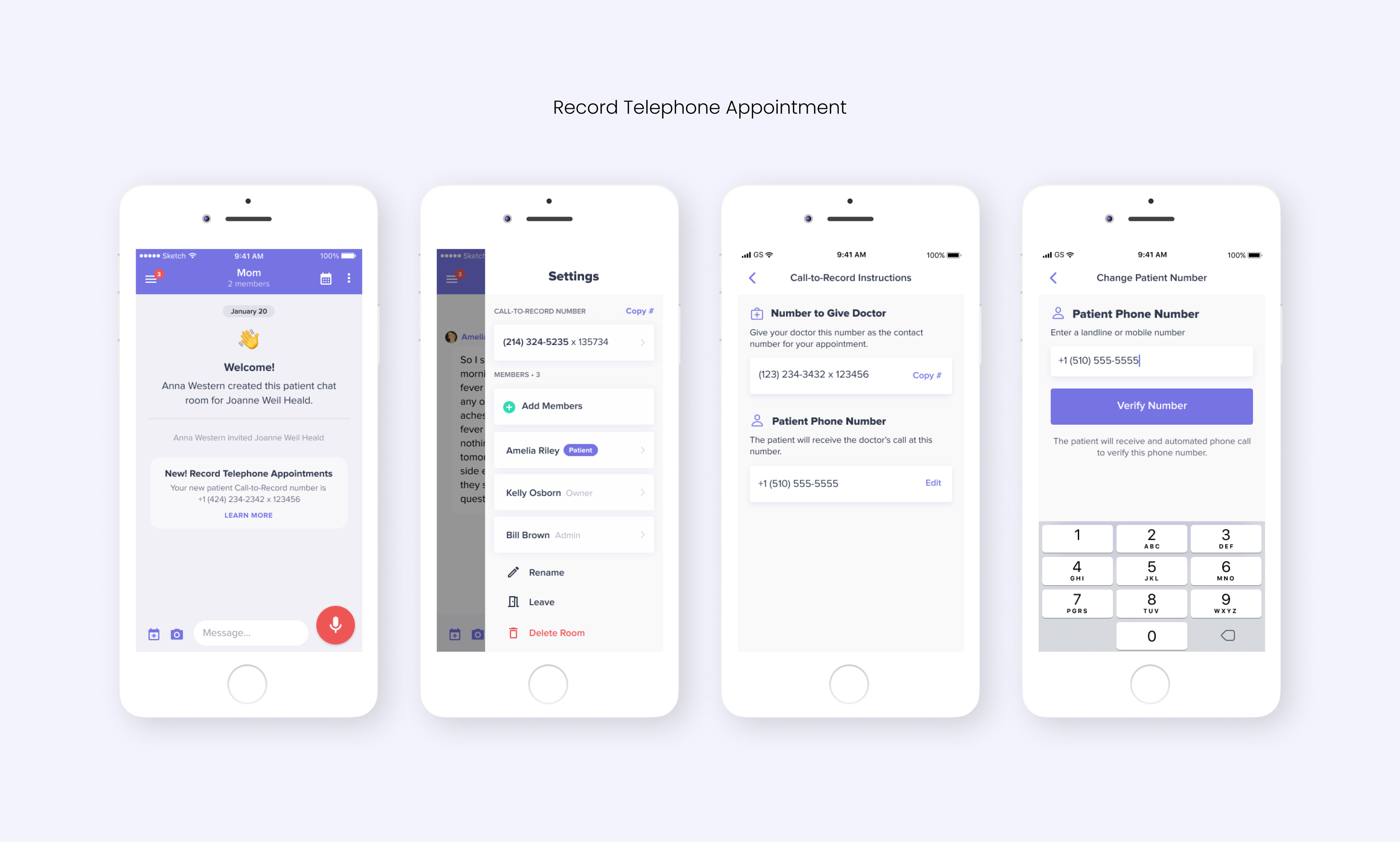 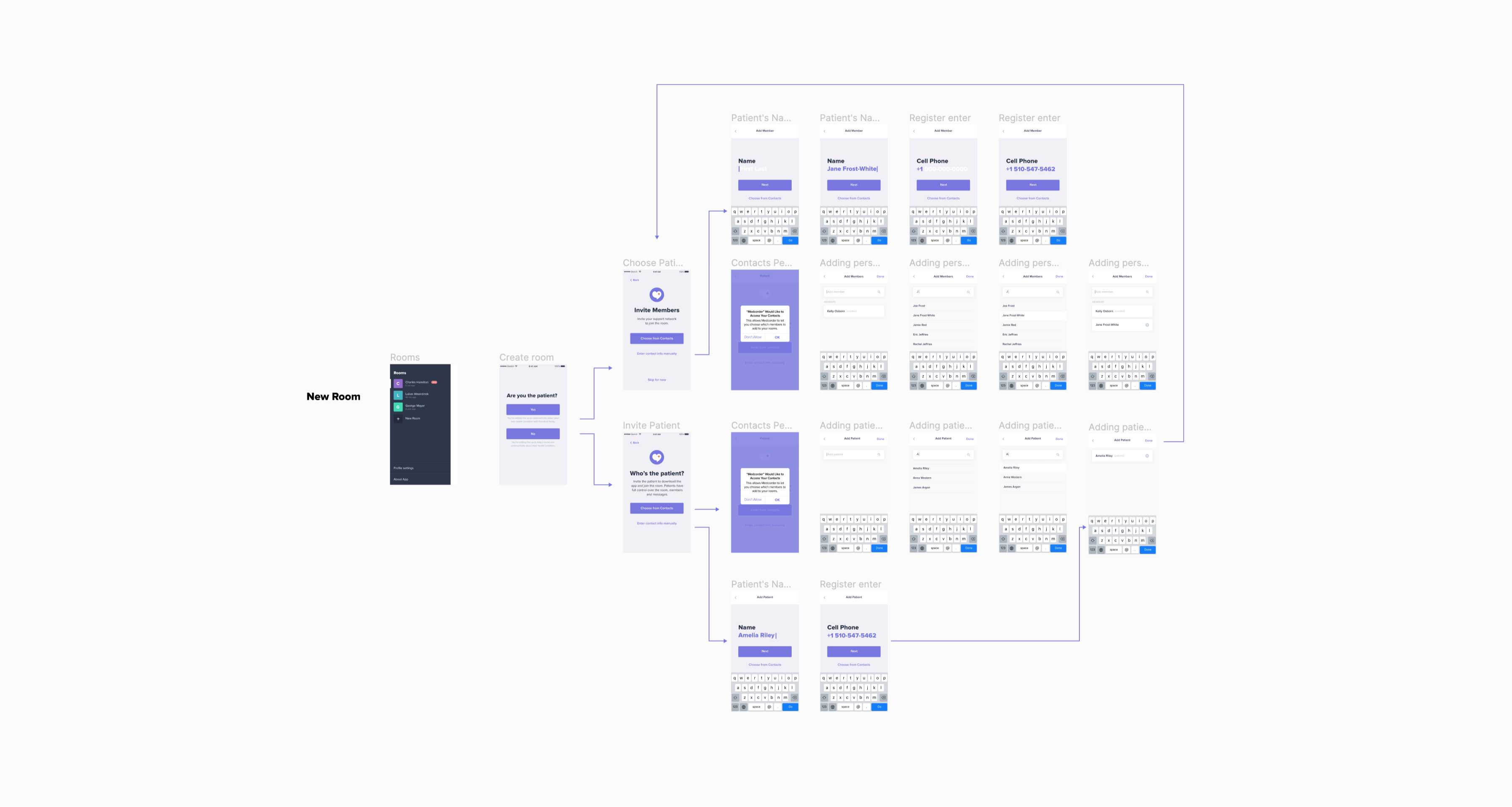 Another product we built and tested was this exam-room recording kiosk. After encountering the fact that many doctors were averse to giving patients permission to record when asked out of the blue, we decided to try approaching doctors directly instead of through patients.

This tablet experience would allow doctors who have already agreed to recordings of consults to offer it to their patients. We built and tested this product over the course of a few months. I designed the experience end-to-end, including a backend portal for doctors to access recordings and installers to manage the tablets. 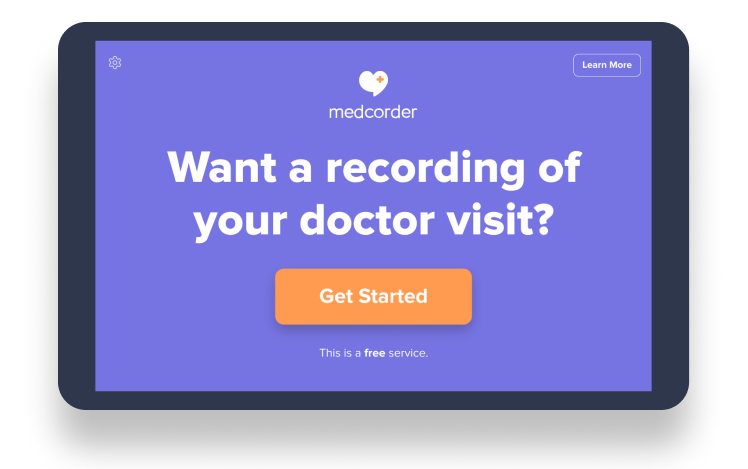 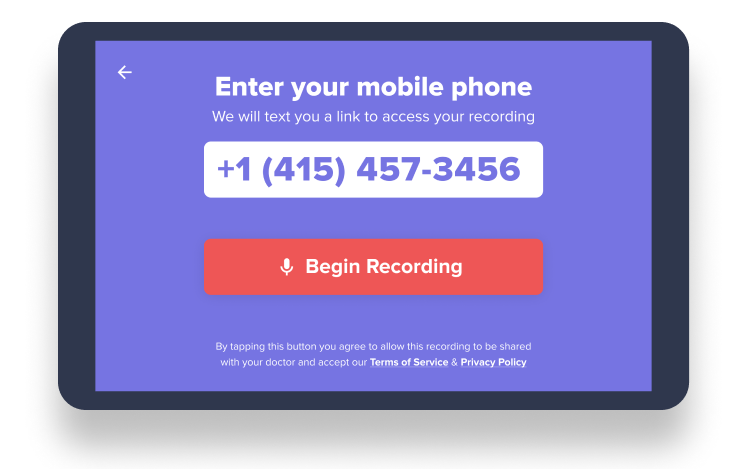 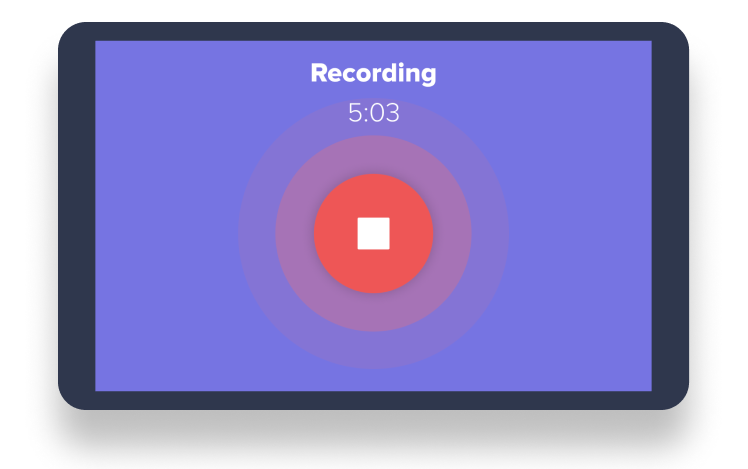 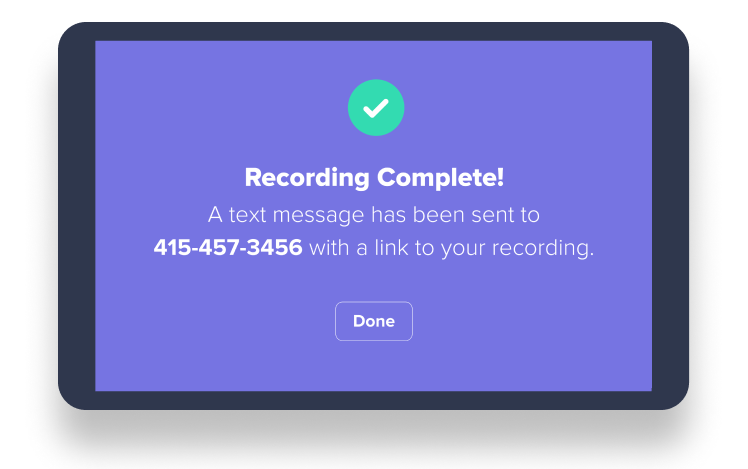 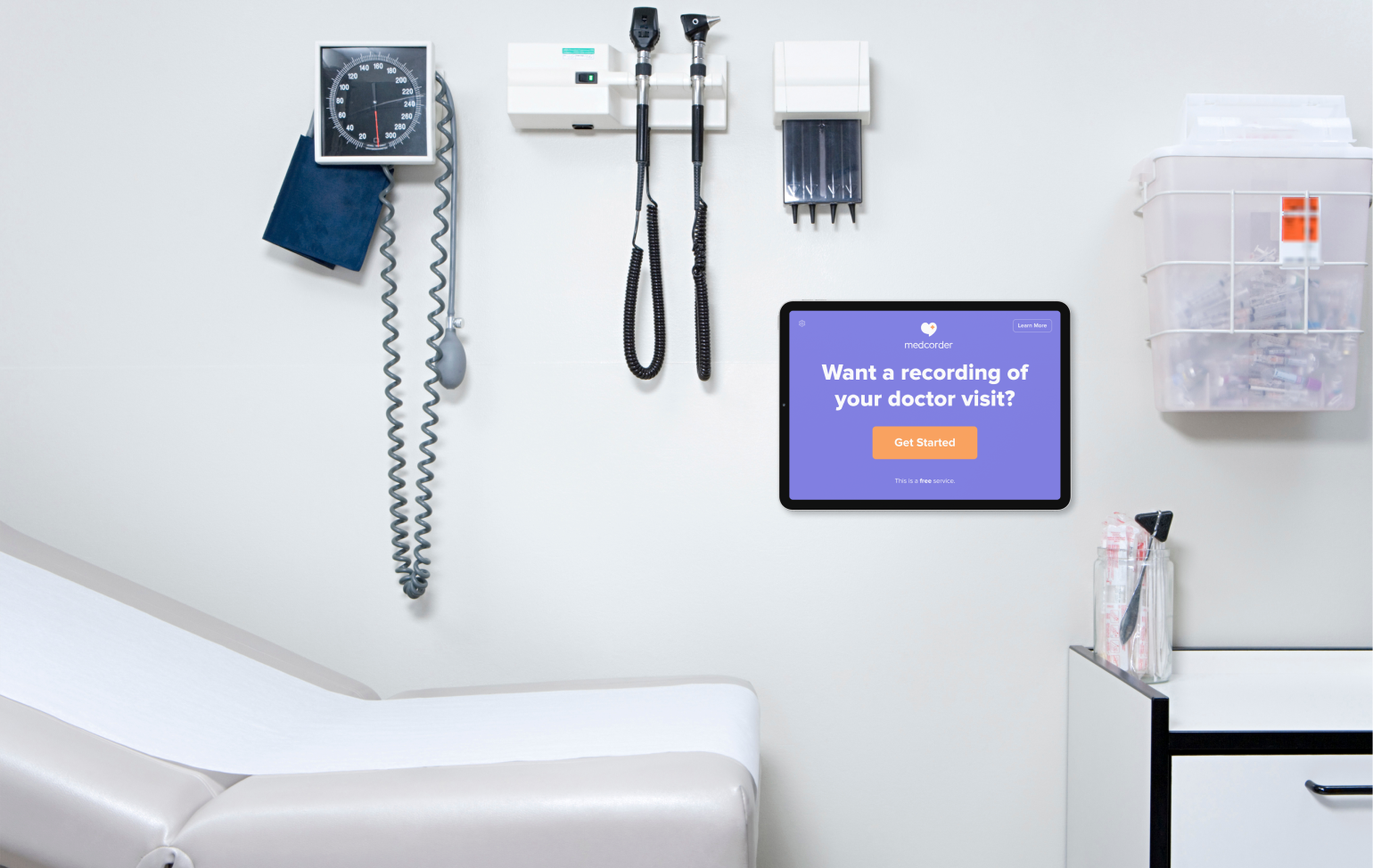 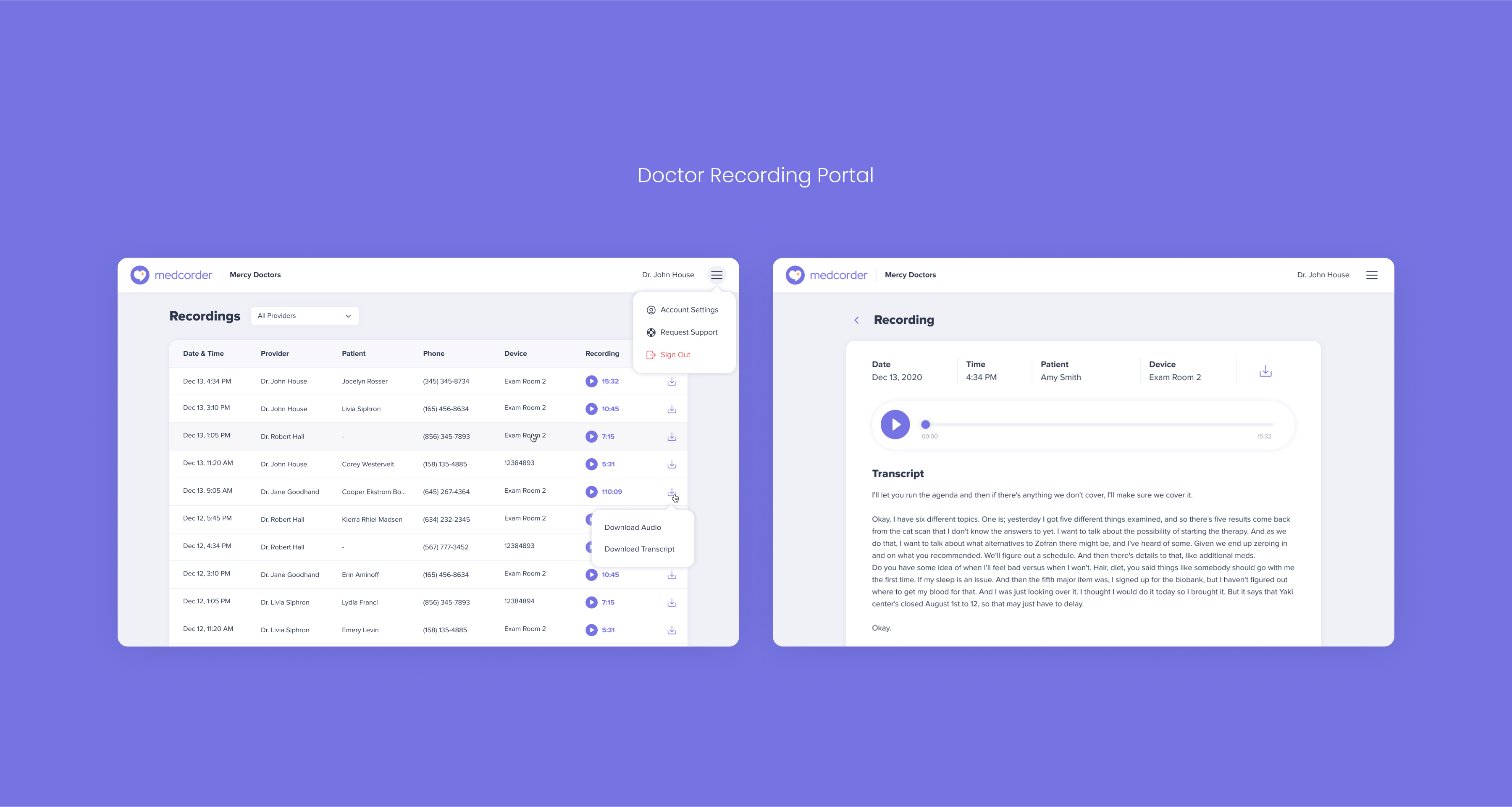 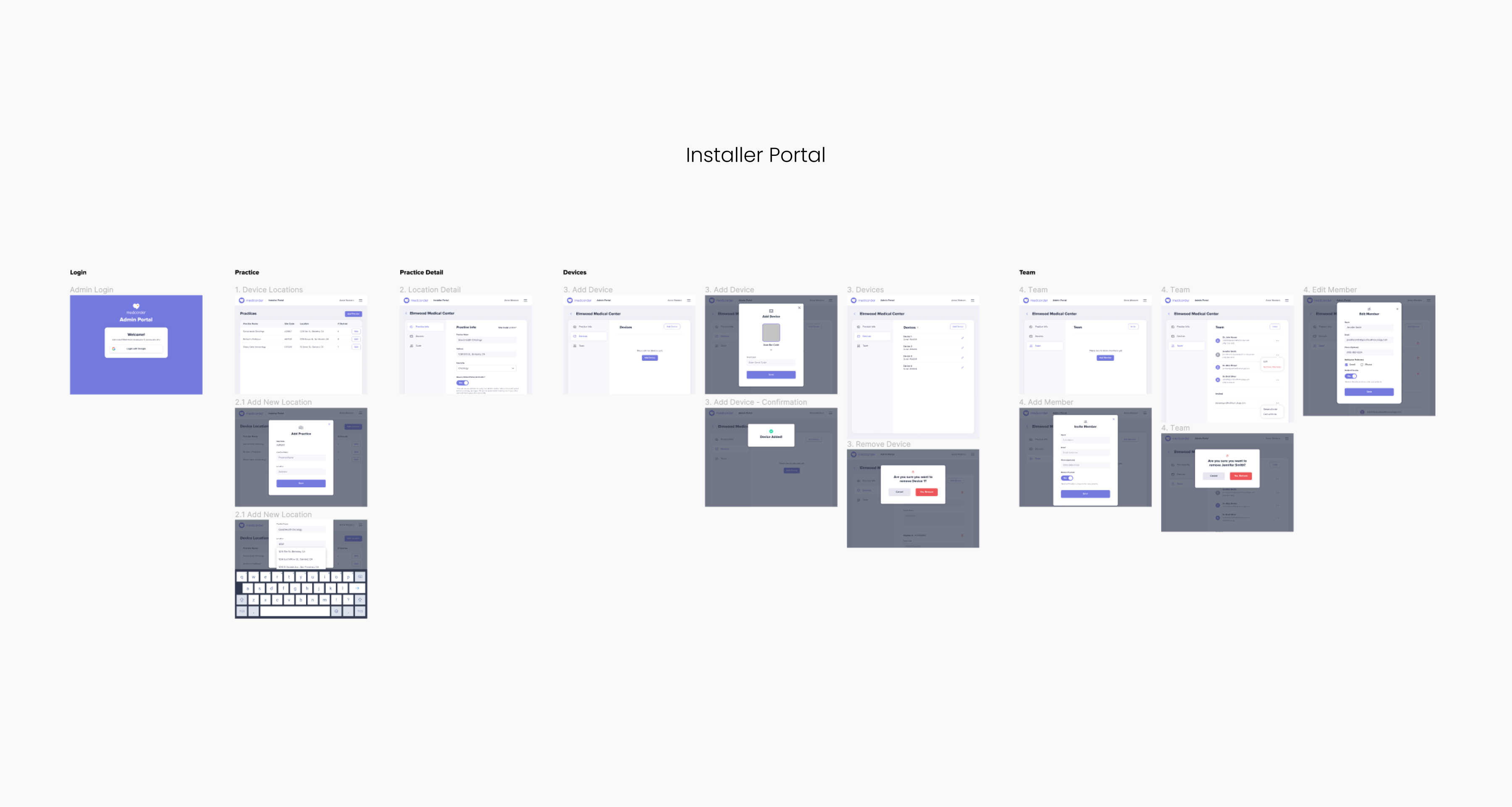 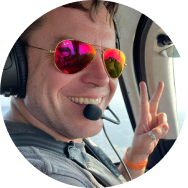 "Anna has been my partner from day one of starting my company to provide design language, a repeatable design system, empathy for the customer, clean and intuitive flows, and designs that are clearly specified for engineering. Anna was a core part of every single view and interface that we shipped; our products outperformed teams 3x our size due to Anna’s superb product design skills.”
- David Weekly, CEO of Medcorder
work
Meta
Medcorder
Howdy
Prism
© 2022 Anna Western
anna@annalouisedesign.com